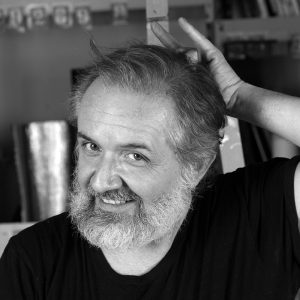 Mauro Drudi was born in Cattolica, on the Adriatic Riviera, in December 1963.
With a painter mother and a father in commerce, he quits oil painting at 7, graphic design at 15, bike racing at 20 and studying at 21. His military service completed, he starts studying again and after few years he begins writing narrative, poetry and literary critiques. In the meantime he graduates.

In 2002 he begins teaching Spanish at the Muraglia Hospital School in Pesaro, a medical centre specialised in the treatment of infant Leukemia.
He is also appointed General Manager of “Il Seme”, a co-operative helping disadvantaged people to enter the Labour market. In May 2003, Larcher Editore publishes his “noir” novel titled “Una giornata di pesca”. In the some year, together with a group of friends, he founds the cultural association “Melodica” and organizes jazz concerts featuring the best Italian musicians.
Since 2010, he has completely dedicated himself to painting.

In the fall of 2013, the San Giovanni in Marignano Town Council offers him the eighteenth-century Santa Lucia Church for the rehearsal set up of “LEI”; a pictorial observation of womanhood made up of 124 portraits inspired by the Annunziata by Antonello da Messina. In 2014 he does live painting performances in ltaly and abroad (Germany, Holland, Romania). The Fano show, composed by more than 300 works, is his 4th solo exhibition.